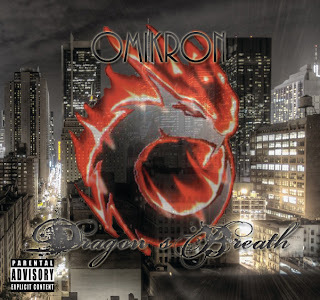 Download By clicking Photo Above
Omikron starts the mixtape off right, “Truth” is like fire and brimstone the lyrics backed by the choir.  “Be Strong” is bananas, this shows off Omikron’s strong points, the confidence in the flow made me listen harder. The most notable line in “Be Strong” is in a world where Martin Luther King gets shot everyone pays for their dreams”, thorough track.  “Free Agent” (Otis Remix) underground vibe, gave me chills to hear real hip hop, this track is raw and he went in, I would definitely play this repeatedly.
“Kilatons” shows off the originality  however I’m not a fan of the beatwell at least with this artist on it. “Two Way Street” produced by Phil J. has a sick sample, the guitar makes the song speak, tells his life story in approximately two minutes, one of the best tracks on the mixtape. “Windows Down” is a straight up laid back track, a sentimental song the imagery is crazy.  “Love Lost” produced by “Slap Traxx, not really feeling this one, sounds like it’s aimed for the women, but it’s more filler than anything.  The self produced ” Hunger” the beat is a little too light for me, doesn’t match the artist’s sound. “Let it Go” another bleh track sounds thrown in.
The versatility of the flow on “No Doze”shows a multifaceted style, nice job here.  “Clowns” produced by King Del was cool not as listen worthy as the other tracks on the mixtape, but still decent.  “Down” produced by “Defftone Beatz has crazy punchlines and the metaphors make you rewind. Omikron has a way with words and imagery is one of his strong points.  “Insomnia” is dope as hell. From the beat to the flow I enjoyed listening to this one.  The track backed with a nice piano melody, is another storytelling joint.
“City Lights” produced by Rapid Traxx should have a real singer on the hook, I think it would be much better.  “When the world Burns” has a unique sound, Omikron’s tone and the vibe from the instrumental actually sound pretty good together.
“Die Hard” produced by Araab Muzik comes in strong the flow on this artist is crazy! I’m convinced he eats the beats and ingests the way the flow is supposed to go very polished. “Flag Down”produced by the artist, was too damn short, just as I was falling into the song it stops at One minute.  Pretty clever though, leaves you wanting to hear more. I think the artist is bananas and over all the mixtape made the cut of A- only because of the few filler tracks.
Definitely Recommended.
————