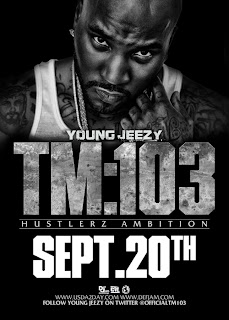 But just to show you how REAL this petition is..

check out a small excerpt:

To whom it may concern at Def Jam. I don’t know what your problem is with Young Jeezy. You have refused to release his album, TM 103, for the last 2 years. All this man has done since 2005 is make hits. TM101 & TM102 have sold well over a million copies & The Recession has went gold. The fans & bloggers believe that you are not releasing his album because of his “Beef” with William “Officer Ricky Ross” Roberts. Now I know Richard is one of the hottest rappers in the game right now. But if you put Jeezy’s four albums (including the CTE album) against Ross’ first four albums, I think you will agree that the Snowman has made you a lot more money than Ross. Last summer, Jeezy had a summer banger with Plies (Lose My Mind) , the summer before he dropped another banger with Wayne and Drake with “I’m Going In”. Why didn’t an album come after any of these songs? At least a follow up video. Jeezy just keeps killing the streets with mixtape after mixtape. What “classic” mixtape has Rick Ross dropped? You can’t fool us with these albums with 37 features (Teflon Don) for long.   via @powtv http://www.twitter.com/POWTV

twitition – DefJam Release Young Jeezy’s TM103 Or We Will Protest September 27 at Your Office!: