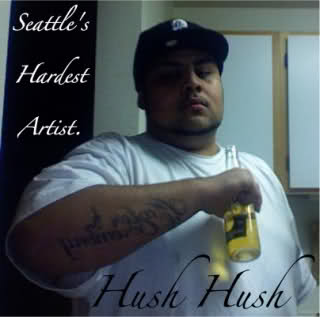 PX:how did you get the name hush hush ?

HH:When I was 6 my momma used to call me that, im extremely loud and
outgoing, class clown type dude. Also Best dressed 3 years in a row in
the year books. LoL.

PX:how long have you been at the beats?

HH:2 years as a hip hop producer 15 years as a musician, i record and
play percussion for churches and fraternitys in seattle.

HH:Im originally from El Salvador, a third world country, we were pretty much indians, we
played music worked and were very spiritual with music at young ages. I was 6.

PX:what do you feel you can bring to the table of production?

HH: Image…A new struggle. I talk about it alot, im not ashamed
of anything, and alot of emcees dont talk about the type of life that
i had, my family traveled hundreds of miles to get to california, i lost
a few uncles on the way, they were murdered, and a cousin of mine killed
himself right in front of us on the bus.. In mexico we were all arrested,
i saw an actual prison at age 6, i also witnessed my mother get abused and my
father get beat. We were released and we made it to california only to share a garage
with 12 people and 2 dogs, we stayed in the heart of the hood too. Now
i own my own buisness and my parents are wealthy. That stays in my head when a beat or song is made.

PX:what is your main goal with production?

HH:To do Gods will. Period.

PX:are you mainly software based or hardware based?

HH:Both, I use garageband and protools to record my live instruments,
when you hear a hush hush beat its most likely a live guitar or bass.

PX:what is your fave piece of equipment /program ?

HH: my takamini 12 string and or my Lp Bongos signed by Tito Puente R.I.P.

PX:I see you got the Stigmata project going on, how did that come about ?

HH:Its actually been put on the back burner for now, its actually a group
effort, me and my brother Xodus have a group named Def Con, this was our
debut album, hes having a baby though so we’ll release later.

PX:what other projects or artists are you working with or on right now?

HH: Capricorn is my solo album, it was just scraped due to some label
trouble i had, i recently left my label which was a local label,
suprisingly alot of labels in seattle want me. LoL. for right now the
only project i got going on is Ready. Set. Takeover. which is a majestic
drama/hush hush mixtape, its almost done. im also producing an R&B Pop
artist named Jamison Aleman, Dj Espee’s New artist Q LOW, a new latino
rapper named young karlos, i already got him on 2 tracks with lucky
luciano from dope house records, a houston legend, and im playing drums
at a nightclub managed by sir mix alot.

PX:do you play any music instruments?

HH: All of them, if I dont know it give me a week with it and i got you.

PX:how do you feel the industry is changing with rocbattle thrown in the mix?

HH:its not but its going too, alot of dudes on here have placements including me and so far all the successful producers i hear on here are very different, Canei is a breakthrough producer, no one sounds like him, same with youngfyre. as for myself, im more of a emcee but my style is very different, its new school, gangsta with a tropical edge, very summer 09 if you get what im saying. LoL. we takin ova this year.

PX:who do you want to work with ?

HH:industry wise Norah Jones and Sarah Mglochlan for smooth vocals,
styles p, beanie sigel, loaded lux and AZ for hip hop, and i would love to make a beat for Sade, Marilyn Manson, madonna, and micheal jackson.
On Rocbattle i would love to work with black ceaser, he said next album
he’ll holla at me so im golden, also mr. colt 45 sent me a track, me and
him had a long rocbattle feud and now we going to have a track together,
i really wanna see peoples reaction to that track. Im always down for a
majestic drama collab or a ONE 5 collab as well. i love to collab with
everyone.

PX:which mainstream beat made you say ” i shoulda made that ?”

HH:Welcome to heartbreak by Kanye West, Angels By Wax Poetic, You & Me
by Skyzoo and 9th Wonder, and Say You Will By Kanye West

PX:when you create what do you like to start with first , melody, bassline drums?

HH: Melody then i build around it.

PX:who or what do you feel influenced you to jump into the production game?

HH:Money. not for me, i had a neice kidnapped not to long ago, we got her
back, but i have another neice thats been missing for 11 years, i want to
have the money to continue the search and bring her home. she will be my
success. after thst its all just a hobby, but right now this is my ticket
out the hood. my hood is a little too rough if you catch my drift.

PX:do you have any links to your completed works with artists already on it ?

HH: Myspace.com/quietmoney777 hit me up and ill show you.. we havnt dropped yet.. but i do have tracks on dj espee’s mixtape with Q Low, the mixtape features akon, gorilla zoe ect ect. its major. www.myspace.com/djespee

HH: no I do not. im waiting on that. i need to think about the direction
of my career.

PX: what are some deals you have on beats going on right now ?

HH:Before i go i would like to thank all of the people who have helped me out on this site, you know who you are. get at me.