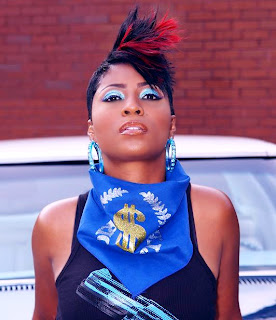 BIO
Shiny, Black nail polish covers all 10 of her perfectly polished nails, while her small but pouty lips are covered in a sexy yet sophisticated red lipstick. Her small frame houses an amazing personality and an even more amazing talent. Her strut would make one believe that they were about to witness a runway show of some sort, but once she grabs the mic and you hear her undeniable flow, you are thankful that she is not. She is the Artist known as Ms. B’havin or Miss B. whos hit single “bottle Action” spearheaded the “Girl fight” movement and changed the way alcohol was served in night clubs through out the country.  Later on she gained more fame and recognition for writing and performing on “Yung Joc’s” supa mega hit single “I know you see it” after enjoying time touring for her single and being on tour with Yung Joc, Miss B. took time off to help other peoples careers by working behind the scene. Now she is stirring up the industry once again with a new catchy single, and a even sexier look. Her New single “I’m so pretty” is a certified viral hit. Once Miss B. posted the song on her twitter page it took on a life of its own through retweets and re posting it started the #teamimsopretty movement.

Before Miss B. or Brandy Hambrick as she is known around the now historic neighborhood of Bankhead was a SO SO DEF rapper she  was a singer. She started off singing in the chorus of West Fulton Middle School in Atlanta, Georgia. “I actually never considered rapping, until I joined a group called Valid Entertainment which stands for Vocal and Lyrics Including Dance” . It was within Valid Entertainment that Brandy was introduced to rap. A fellow member of the company Blizz  wrote her first verse and showed her how to spit it. The rhythm and the flow of the words came so naturally to Brandy that she decided to become a lyricist officially. Once reaching the Epiphany that being a lyricist is what she wanted to do, she needed a name. Her friend Lou, suggested the moniker Ms. B’havin because she was so hardheaded. When Ms. B’havin started making the world aware of her presence it became apparent to all that she encountered that she was that breath of fresh air that this cookie cutter industry had been holding their breath for.

Ms. B’havin doesn’t classify herself solely as a rapper. She is an entertainer. Once she became a member of the Malaco label in 2010 the songs that were released proved that. Turn It Up featuring FloRida, and I’m So Pretty are definitely  far extremes from her NItti Produced hit “Bottle Action”. Either way its a new day for Ms. Bhavin. A  new deal, a new sound a new appreciation from her old fans and new ones. She also has a new movement that was started on popular social networking site twitter. #teamimsopretty as it was affectionately named after her new smash hit single “I’m So Pretty” has also taken the industry by storm. This is all girl movement spearheaded by Miss B. herself has proven to be a new force to be reckon with.

The #teamimsopretty is a network of industry women who support each other and Miss B’s movement. #teamimsopretty so far has an eyeshadow line under Sp3ctrum cosmetics, which partial proceeds benefit Autism. They also have a ning network so that they can stay posted on all the exciting events that each other spearhead or are apart of. The #teamimsopretty movement is definitely official and big. You can attend any industry based event in Atlanta now and see a #teamimsopretty shirt some where amongst the attendees. The groups presence in now being requested locally and regionally. Miss B. and #teamimsopretty are here and ready to work.

So now one question still remains? Is she still hitting people with bottles? Ms. B’havin coyly replies not a chance.